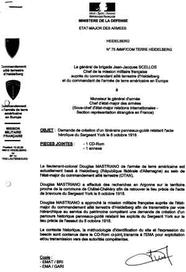 The trail takes visitors through the battlefield where the 82nd infantry fought for the Argonne and eventually leads to the SGT. York Monument. The stone plaque is located near the exact location were York fought off a German-led bayonet attack while capturing 132 German prisoners on 8 OCT 1918.

The historic trail and monument honors York, all those who served in France during WWI and preserves an important chapter in American Military history. Below is a photo of the plaque fresh out of the shipping crate.

SYDE led the effort to commemorate the 90th Anniversary of York's actions in the Argonne. The Commemoration Ceremony and dedication of the SGT York Historic Trail and Monument were held on October 4th 2008 in Chatel Chehery, France.

York's son George Edward York, grandson COL Gerald York and great grand-daughter Deborah York were among the honored guests, dignitaries, and nearly 150 Boy Scouts to attend in support of the ceremony to officially open the trail. More details on the ceremony can be found here.

SYDE needs your help to improve the trial!
Although the SGT York Trail is open for visitors, improvements are still needed. Tax deductible donations are now being accepted through a non-profit organization called Bill Rudge Ministries. 100% of donations are used for the trail.

Click HERE for details and see how you can participate.

SYDE in the PRESS

Mayor of Châtel Chéhéry
Alain Rickal is a strong supporter of SYDE and stands in agreement of the SYDE location for the York Spot.

MG Zabecki is one of the most senior US Army historians and is the US Army expert on World War One.  He is extensively published on the Great War. 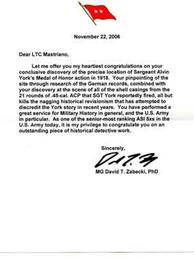 Named for the late ambassador and former CIA director William E. Colby, the Colby Award recognizes a first work of fiction or non-fiction that has made a significant contribution to the public’s understanding of intelligence operations, military history or international affairs. The William E. Colby Award began at Norwich University in 1999.

NORTHFIELD, Vt. – Biographer Colonel Douglas V. Mastriano, PhD is the 2015 William E. Colby Award winner for his book, “Alvin York: A New Biography of the Hero of the Argonne.” Norwich University awards the Colby annually to an author of a first book.

A veteran of the first Gulf War and Afghanistan, Colonel Mastriano was commissioned in the United States Army in 1986 and began his career with the 2nd Armored Cavalry Regiment serving along the German Iron Curtain. With the end of the Cold War, he deployed to Iraq for Operation Desert Storm, where his regiment led the main attack against Saddam Hussein's Republican Guard. Colonel Mastriano subsequently served in tactical, operational and strategic assignments during his ongoing career in the army. He also served four years in NATO Land Headquarters in Germany, and deployed three times to Afghanistan, where he was director of the ISAF Joint Intelligence Center.

In the book, published in 2014 by the University Press of Kentucky, Mastriano uses archival research, military terrain analysis and forensic study to reconstruct the events of October 1918 and sort fact from fiction in the account of the act of heroism that earned Sergeant York the Medal of Honor in the First World War Mastriano details York’s early life in Tennessee, his service in the war up to and including the famous October 8, 1918, engagement, and his return to a civilian life dedicated to charity. As the centennial of American involvement in World War I approaches, this book shares the story of one of the war’s most notable heroes.

“Superbly researched and splendidly written, Douglas V. Mastriano’s work on Alvin York recounts not only the incredible story of a Tennessee mountain boy who won the Medal of Honor and became the greatest American hero of the First World War, but also of how, through years of investigation and exploration, he located York’s battle site and was instrumental in the creation of two permanent monuments and an historic trail,” said Carlo D’Este, executive director of the William E. Colby Military Writers’ Symposium.

“I am humbled by the distinction of being the 2015 William E Colby Award recipient. The Colby Award represents the highest caliber of works published in the United States since 1999. It is a privilege to have the book “Alvin York: A New Biography of the Hero of the Argonne” recognized worthy of this honor,” - Douglas Mastriano.

The award and honorarium will be presented at Norwich University during the 2015 Colby Military Writers’ Symposium at the “Meet the Authors” Dinner on April 9, 2015.
Order now

"Alvin York: The New Biography of the Hero of the Argonne" written by COL. Douglas Mastriano was released in spring 2014.

This is the first full-length biography of Alvin York in decades.  In Alvin York, Mastriano meticulously examines York's youth in the hills of east Tennessee, his service in the Great War, and his return to a quiet civilian life dedicated to charity. By reviewing artifacts recovered from the battlefield, using military terrain analysis, forensic study, and research in both German and American archives, Mastriano takes his over 20 years of York study and reconstructs the events of October 8 and corroborates the recorded accounts.

Reviews are in:
"Not only illuminates York's heroism but provides insights on small unit tactics and on the shortcomings of the American Expeditionary Forces. One of the more interesting aspects of the book is how York's civilian life was changed by the events in France. A truly useful and interesting account." -- Timothy K. Nenninger, editor of The Way of Duty, Honor, Country: The Memoir of General Charles Pelot Summerall

"Reveals both the complexity of York and the authenticity of his achievements on the battlefield. The use of German documents is first-rate and adds a new dimension to our understanding of the Argonne battlefield in 1918. Mastriano's knowledge of the terrain is excellent." -- John Mosier, author of Verdun: The Lost History of the Most Important Battle of World War I, 1914--1918

Available to order on Amazon and Barnes & Noble

Sergeant York battlefield artifacts to go on display in the Pentagon and museums across the United States.

This endeavor goes back to our extensive research in the US and German archives to once and for all resolve the debate on whether there was evidence that York accomplished the incredible feat; capturing 132 German soldiers after eliminating a German machine gun position and single handedly fighting off a bayonet attack. The artifacts from the fight between York and the German Imperial Army were exactly where they should have been – even after ninety years. After thousands of painstaking man-hours in the French Argonne Forest, we carefully recovered these valuable pieces of American history.

After the recovery of these items was accomplished and our findings were concluded as accurate (see endorsements left), we worked with officials in France, Germany and the USA to construct the Sergeant York Historic Trail and erected two monuments to forever preserve and mark the location where York’s incredible feat occurred. These were dedicated on the 90th anniversary of the event in October 2008.

Moving the artifacts took coordination with an incredible amount of diverse government officials from Europe and the United States, customs, the US Army and the USAF. The flight was fantastic and we flew in an USAF C-17 cargo plane with a watchful eye on the artifacts.

Upon arriving in Washington DC, we documented each item with professional artifact technicians from the Center of Military History, who now have responsibility for the items. They plan to first display these items in the Pentagon and then in museums around the nation (CMH has oversight of some 53 museums around the world).

During the handover of the precious artifacts, CMH conducted a ceremony that included members of the York family and the CMH leadership. The purpose of this event was to celebrate the preservation of the physical evidence related to one of the most amazing feats of heroism in American history. As for our efforts in the Sergeant York Discovery Expedition, we thank all of the people in France, Germany and the United States who have helped make this happen. Our work is not done. We intend to continue to improve the SGT York Historic Trail in the Argonne Forest of France and to do our part to honor the legacy and heroism of Alvin York for the next generation.

The Sergeant York Discovery Expedition (SYDE) has taken many trips to the Argonne forest in search of the precise location where Alvin York earned the Medal of Honor. Below are some of the stories covering our search from failed attempts to our success in the discovery of the "York Spot" in October 2006. We will post additional information on upcoming and recently published articles as they become available so please visit us again soon.

French Military Mission to NATO, who reviewed the SYDE findings and concluded that they are 100% correct.(en français)

People sometimes ask if any third party sources support our claim to finding the exact location where SGT. York earned the Medal of Honor.  The answer is, YES, and here is what they have to say. Click on the letters below for larger views.

The Center of Military History(CMH) is the final word on Army history and fully endorse SYDE's discovery as accurate.  This endorsement includes CMH sponsorship of SYDE's work to preserve the SGT York discovery and artifacts.  Dr. Clark is the director of CMH. 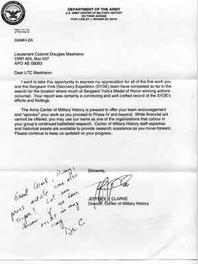 SYDE honors York, soldiers and preserves a piece of history.

The Sergeant York Discovery Expedition is pleased to announce the official opening of the SGT. York Historic Trail and Monument. SYDE teamed up with Grandpre Developpement and the Boy Scouts to build the 2 mile loop-trail. 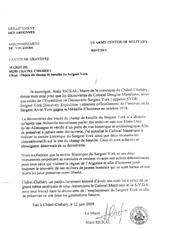